International Women’s Day celebrates women all over the world, highlighting women’s achievements in all professional fields and aspects of society. In doing so, the day raises awareness against bias and supports a gender-equal world.

After taking its first steps towards rebuilding after an eleven year-long civil war, Sierra Leone was overwhelmed with the devastating Ebola outbreak which resulted in almost 4000 deaths and left over 12,000 children orphaned.

The consequences for children in Sierra Leone continue to be dire, with young girls the ones that suffer the most with no one to care for them. Young girls were too often subjected to rape, forced into marriage and abandoned.

Mabinty (left) and Mary (right), both teenagers, were forced to leave their family homes and commence a life on the streets of Freetown after each was discovered to be pregnant. 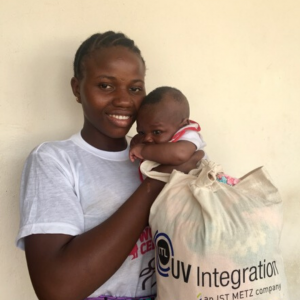 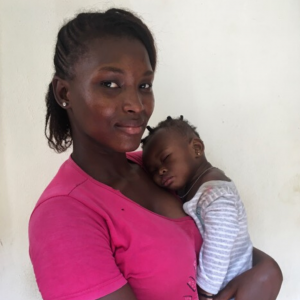 Although not an uncommon occurrence in Freetown, Sierra Leone’s capital, there are little to no support structures in place for young girls in these situations. With little hope for their own futures, the girls’ focus is on the health and safety of their unborn babies.

For Mabinty and Mary, hope is found at the Aberdeen Women’s Centre - a comprehensive maternity hospital that provides free healthcare to pregnant women and children along with skills and training to help women take control of their financial future after the birth of their baby.

Prior to coming to Aberdeen Women’s Centre, the future for Mabinty and Mary was bleak and frightening. Now with healthy, newborn babies, Mabinty and Mary are earning income-generating skills to become financially independent and have begun, for the first time in a long time, to dream of a better future.  Mabinty plans to one day become a doctor and hopes that her son will become a nurse.

The Aminata Maternal Foundation believes that all women should be allowed to deliver a baby in safety. We believe that teenage girls should be given an opportunity to dream big and build a plan for their future. We believe that each one among us has the power to transform lives for an equal and enabled world.

If you support these dreams, this International Women’s Day takes a step towards a more equal world and give to the Aminata Maternal Foundation. Making healthcare equal for women in Sierra Leone. #EachForEqual

Find out how you can continue to support more women and their babies future in Sierra Leone.

Do you want to hear more about Mary and Mabinty?

Unlike most other stories of the inspirational women involved with the Aberdeen Women’s Centre, Susan wasn’t introduced to the AWC with the intention to become a nurse or staff member. Instead, she was booked in by the Centre’s antenatal team during their community outreach service, heavily pregnant with her baby. At this time, Susan was […]

It was never going to be easy. Amy was just a year old when her late father abandoned her. She grew up in poverty with her single mother in the Western Area, one of Sierra Leone’s five provinces. It is easy to romanticise that great success and resilience will so often arise from equally great […]

On 9th January 2020, Blessing a 16-year-old girl delivered a beautiful baby girl. However, her story is one of sadness and shows the engrained misinformation around sexual and gender-based violence and the age of consent in Sierra Leone. Blessing from the slum area of Dwarzak in Freetown was happily attending school and studying hard, living […]

Mabinty Conteh grew up in a village with her mother and father until her father abandoned the family when she was eight years old. When Mabinty was sixteen, a woman from Freetown came to her village on business and promised Mabinty and her mother a better life and a better education for Mabinty. After a […]

Eighteen-year-old Mary Sesay was living with her older sister in Aberdeen when she became pregnant. Soon after she learned this she was told to leave her home because the space was too small for both mother and child. At this point, the father of her unborn baby became emotionally and physically abusive to Mary. Now […]

We heard of Zainab before our trip to Sierra Leone in September 2016.  She was 15 years old and 37 weeks pregnant. She lives in one of the districts of Port Loko with her partner’s family. Six weeks later, when we arrived in Sierra Leone, Zainab had yet to go into labour, and had not […]

In Aminata's speech at the National Press Club yesterday, our CEO and Founder not only shared her story and her vision for the foundation. She also shared her action plan in ending infant and maternal death in Sierra Leone. More than being inspiring, our foundation wants to take action. And we cannot do this alone. We need your help. 💛

The Aminata Maternal Foundation is looking for a Partnership and Philanthropy Manager.

We are very pleased to share this exciting news about an excellent work opportunity for a talented and committed fundraiser at our organisation. This opportunity cannot come at a greater time to work with the foundation as we have great things being planned within the year.

The person we are looking for will directly work with our inspiring woman and leader Aminata Conteh-Biger. They will work together to achieve the vision of ending maternal and infant deaths in Sierra Leone.

For interested applicants, please send an email to aminata@aminatafoundation.com.au with the subject 'Partnership and Philanthropy Manager Application - YourLastNameYourFirstName'

The Aminata Maternal Foundation focuses on safe deliver and provides the best quality maternal health services, along with the creation of sustainable communities by educating women and giving them the right tools to empower themselves.

To strengthen the infrastructure of maternal healthcare in Sierra Leone. We do this through:

1. Midwifery training programs - training more midwives is at the core of our work to ensure a safe pregnancy protocol for ALL birthing mothers.
2. Our Dream Team program - supports women with self-care, baby care, and essential life management skills to help them better their future.
3. Safe transport and diagnostic support - helping women to and from our healthcare partner providers for pregnancy checks and safe delivery of their baby.

Tomorrow, we will get to witness our Founder and CEO share her powerful story and her life-changing advocacy to the world at the National Press Club of Australia.

If you haven't gotten your tickets yet, you may get them at the link in bio. You may also watch it live on ABC TV.

Let us all be inspired, be empowered, and be moved together.

Part of our #SmileForMaternalHealth campaign is last week's wonderful Mother's Day celebration with these empowering women. Everyone's generous donations and never-ending support are what makes the impossible possible in the foundation.

Hence, for every $100 donation, you help us cover for the medical costs for a normal delivery of a baby in Sierra Leone.

Mother's Day may be over, but the foundation's advocacy to providing safe and quality delivery for both mother and babies never stops. As we continually work on this together, we support every mother's call to ensure her child's future- every single day. 💛