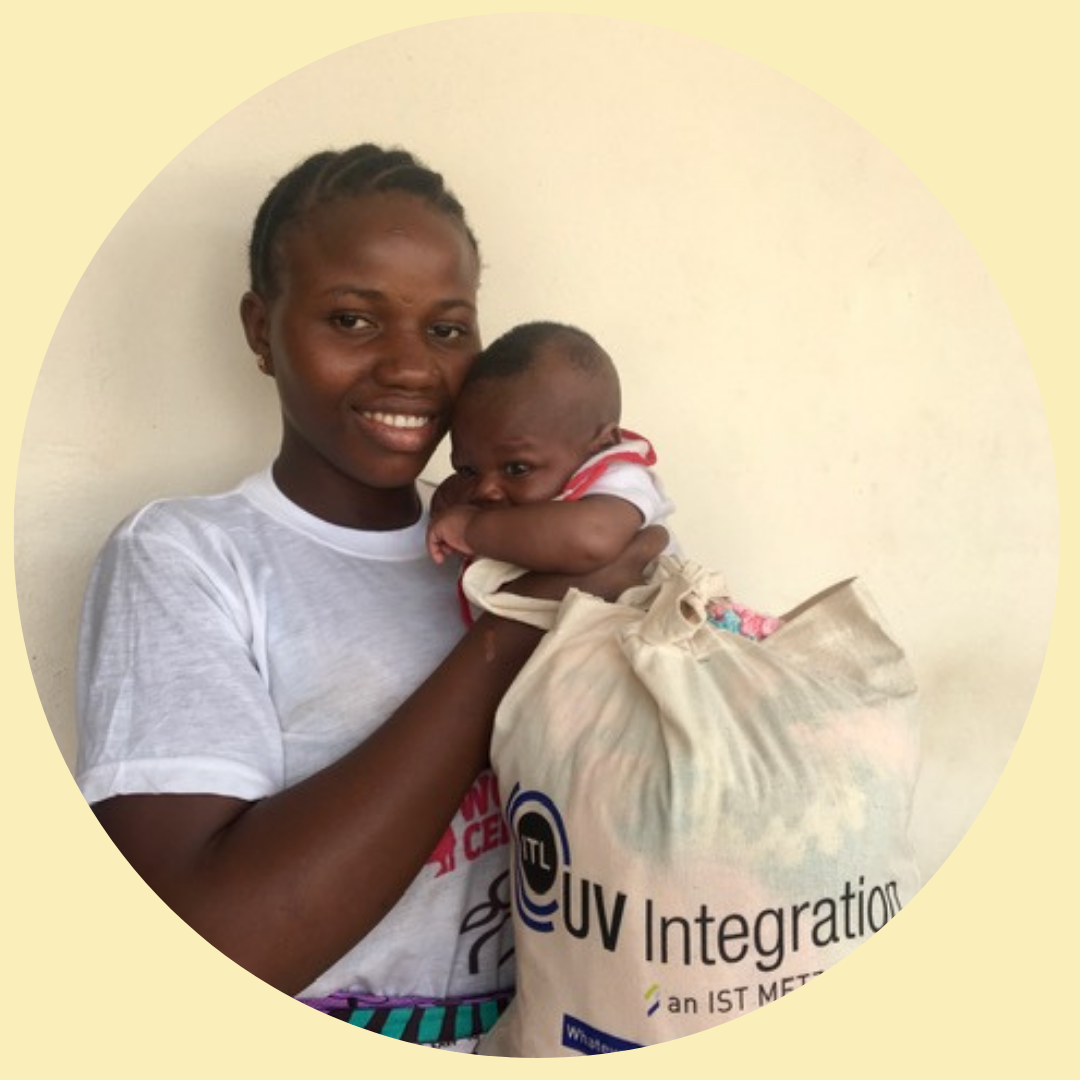 Mabinty’s story is one of despair and hope. Mabinty was 16 years old and in Junior Secondary School when she was living with her sister and husband. She was brought to Freetown by her elder sister at the age of seven so that she could access education in the hope of a brighter future.

One evening, as her sister travelled, Mabinty was raped by her brother in law. “On that fateful evening I was alone with my sister’s husband, we were watching a movie in the sitting room when he tried to have sex with me. I refused and he raped me. I was afraid to tell my sister or anyone as he threatened to kill me and to tell my sister to send me back to my village,” Mabinty explained.

Mabinty was frightened, ashamed and alone. She did not want to be sent back as she loved school and was scared all of that would be taken away from her.

Three months later and Mabinty’s sister noticed that she was pregnant. Her brother in law threw her out of the home and the elders turned their backs on her. Mabinty had to roam the streets, seeking shelter and food from neighbours for over two months before she was rescued by her friend’s family who accepted her into their home.

Mabinty was struggling to access maternity health care services. “I was not going to a clinic because I did not have money to pay for medical services and I was emotionally broken when my sister rejected me,” she said.

Fortunately, Mabinty was booked by the Aberdeen Women’s Centre outreach field team and was enrolled into the Dream Girls program. She gave birth at the Centre to a bouncing baby boy where she continues to access free medical care. Mabinty was part of the first team that was enrolled into the Girls Hostel Skills Training Program where she received training on Catering and Hospitality, Literacy and Numeracy, Health Education, Art and Craft and Counselling.

Mabinty is now undertaking formal education and she is using the skills acquired from her catering classes to work and pay for her school fees and to take care of her child. It is incredible the difference your support can make in someone’s life today.

Your donation will ensure that we can continue to help young women like Mabinty and her child. We need your help to be there for people when they need us most. Please make an urgent donation of today.

As Mabinty said to us, “I wonder what life would have been like without Aberdeen Women’s Centre. Where would I have been?"

In 2020 Sierra Leone overturned a ban prohibiting pregnant girls from attending school. However, teens are not encouraged to study when they are expecting.

According to the 2019 census, at the age of 19, nearly half of Sierra Leonean girls have started having babies. That means that almost half of them are deprived of education.

The "Dream Team Program" aims to transform their lives through income-generating skills and empowerment at the most vulnerable moment in their lives, both economically and emotionally, through rebuilding their self-esteem and confidence.

Learn more on our Highlights or visiting our Website
https://aminatamaternalfoundation.org/mission/our-projects/the-dream-team/

*In order to comply with the government COVID restrictions the Dream Team Program is currently suspended.

We wish that in 2021 more children can have a safe start in life.

"After the storm comes the calm"

Here's how we started 2021. Laughs, sense of humour, generosity and hope.

Thank you @thelukecook for using your creativity and talent to fundraise for the Aminata Foundation. We are forever grateful!

About one year ago @freedomfromfistula welcomed Her Royal Highness The Countess of Wessex to the Aberdeen Women’s Centre (AWC) in Sierra Leone.

During her visit she learned about the AWC programs that treat children with severe injuries caused by rape and FGM, including paralysis and incontinence. HRH's visit was essential to help raise awareness of the importance to expand the services to support child victims of rape.

Our CEO's memoir is also available at @cityofvincentlibrary

An inspiring story to start 2021

Having a baby can cause a huge impact in a women’s life, especially in young women's lives. ⁠
⁠
The @AminataFoundation came about following the birth of @AminataConteh-Biger 's two beautiful children. She envisioned women in Sierra Leone to be able to access their basic human rights. ⁠
⁠
That’s why we work tirelessly to help as many women as possible to deliver their babies with dignity and safety.

With your incredible support we not only made it through 2020, but our community grew bigger and stronger than ever. Thank you!

Please keep supporting us, motherhood should mark a beginning, not an end.

2020 has been a trying year, but the wave of generosity we are receiving is inundating our hearts.

Thank you @thelukecook for supporting mothers and babies in Sierra Leone.
Your act of generosity can be the gift of a lifetime.

*Check out @thelukecook 's Stories, laugh and donate via link on his Bio.

Mr Luke Cook is fundraising for the AMF. We are deeply grateful!

Each and every one of you is making a meaningful impact this Christmas. Thank you!!

From the AMF family to yours

A story of sadness is one of hope when someone is not alone.

Pregnant and abandoned, Mabinty could access safe maternal healthcare and a place to stay when she most needed.

Please keep supporting us. Together we can give the gift of hope this Christmas.

What are you doing in March next year – on Monday 8 March, to be exact?

You’re invited to join us for a very special in person (hooray!) IWD event in Sydney with three powerful speakers - @Aminata_Conteh_Biger, Jane Caro AM and @TeelaReid.

IWD is one of the most popular events on the Business Chicks calendar. There’s something about our IWD events; they’re just … special. It’s pure magic when women come together to celebrate women en masse.

Come alone, bring a friend or buy a table - just don't miss out on the limited tickets! Head to the link in @businesschicks now.