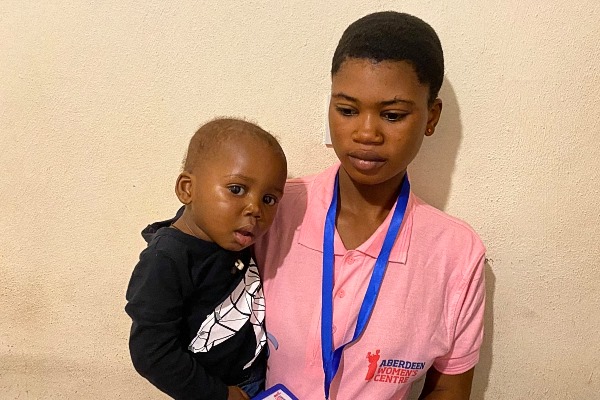 Unlike most other stories of the inspirational women involved with the Aberdeen Women’s Centre, Susan wasn’t introduced to the AWC with the intention to become a nurse or staff member. Instead, she was booked in by the Centre’s antenatal team during their community outreach service, heavily pregnant with her baby.

At this time, Susan was barely 17 years old. Her life had already been fraught with struggle and an all-to-soon encounter with death, as her mother died when Susan was just six months of age, and her father a few years after. She left her home village in Sierra Leone’s southern district of Moyamba, taken in by a new family. Here, Susan lived with her adoptive parents for 12 years, in which time they took good care of her. And yet, Susan suffered another death as her adoptive father passed away. With her adoptive mother unable to support them both on her own, she was forced to take Susan back to her village, returning to what one could only imagine to be a place of deep grief and pain.

It was then a relative took Susan to Freetown to stay with a cousin. But after a misunderstanding, they refused to accept Susan in their home, forcing her to leave and stay in an unfinished apartment with a violent man. She was ill-treated and abused. Eventually, she became pregnant.

It seems impossible to fully understand the effects of such trauma not only on one’s body, but one one’s mind and spirit. After Susan gave birth at the Aberdeen Women’s Centre, she was invited to take part in the Dream Team, a programme run by the Aminata Maternal Foundation that gives both health care to young mothers, as well as vital education in health and literacy. Importantly, she received psychosocial counselling, giving her space that would let her emotions breathe, that would allow confidence to grow.

We see the trace of this confidence already starting to show; Susan has recently joined the skills training programme in the hope to soon become a tailor.

To the Aberdeen Women’s Centre for their support, to the counsellors who shared her pain, and to the teachers who sought to lift her spirits, Susan says “Thank you very much for everything.” But we also must thank Susan for sharing her story and for the privilege of being able to hear it.

Our CEO and Founder, Aminata Conteh-Biger, addressed the nation at the National Press Club on 25th May.

Her talk was full of emotion and raw vulnerability as she inspired the audience with her tragic story, and made her brave plea in asking for help to support the Foundation in saving mothers' and babies' lives in Sierra Leone.

To continue to save lives, we now need:

1. Sustainable giving in the form of corporate sponsorship, regular donations and workplace giving
2. Connections and contacts: access to people in networks who believe in our work
3. Diversity budgets and workplace giving in governments, mining companies, pharmaceuticals, doctors, obstetricians, and midwives.
4. Professional pro-bono service offerings
5. Support the Foundation by buying Aminata's book Rising Heart and, engaging Aminata as a keynote speaker

THIS EOFY, MAKE A LIFE-CHANGING DONATION.

We are at the end of this financial year. We urge you to consider using donations to our foundation as a tax incentive. There are a number of ways you can support.

The mothers and their babies of Sierra Leone need your help more than ever. That's a simple and honest fact. They need your support as they navigate the health and livelihood impacts of the pandemic, and move FROM SURVIVAL TO REBUILDING.

Your donation can do so much!

• $100 - can provide wraparound care and education for a teenage girl

• Sponsorship of a specific project

• Resources and equipment for midwives to provide ante-natal care and diagnostic support.

DID YOU KNOW? The lifetime risk of dying while having a baby in Sierra Leone is 1 in 17. That is about 500 times more dangerous than having a baby in Australia where the same figure is 1 in 8,700. The country has been ranked third lowest in terms of the Mothers’ Index, which assesses the well-being of mothers and children.

Here at the Aminata Maternal Foundation, our vision is clear and simple: Motherhood should mark a beginning, not an end. 💛

Learn more about what we do at the link in our bio.

We are one with the United Nations High Commissioner for Refugees (UNHCR) as they commemorate World Refugee Day today!

World Refugee Day is an international day designated by the United Nations to honour refugees around the globe. It falls each year on June 20 and celebrates the strength and courage of people who have been forced to flee their home country to escape conflict or persecution. World Refugee Day is an occasion to build empathy and understanding for their plight and to recognize their resilience in rebuilding their lives.

The Aminata Maternal Foundation is one with the Aberdeen Women's Centre in fighting to end maternal and infant deaths in Sierra Leone. Learn more about this partnership at the link in our bio.

The organisation focuses on safe delivery and provides the best quality maternal health services, along with the creation of sustainable communities by educating women and giving them the right tools to empower themselves.

Before the weekend approaches, we would like to thank everyone for your continuous generous support to the foundation.

For every $150 that we raise together, we can provide a natural and safe birth for a teenage mum and provide access to the skills programme at Aberdeen Women's Center.

None of us would be alive if it were not for our mothers. Every mother and every baby deserve a safe and quality childbirth. Help us achieve our goal of ending preventable maternal and infant deaths in Sierra Leone. 💛

In a country where the lifetime risk of maternal death in Sierra Leone is 1 in 17, one of the highest in the world, our vision is simple. And that is to end maternal and infant deaths during childbirth in Sierra Leone due to poverty.

Click the link in our bio to take part in this life-changing cause.