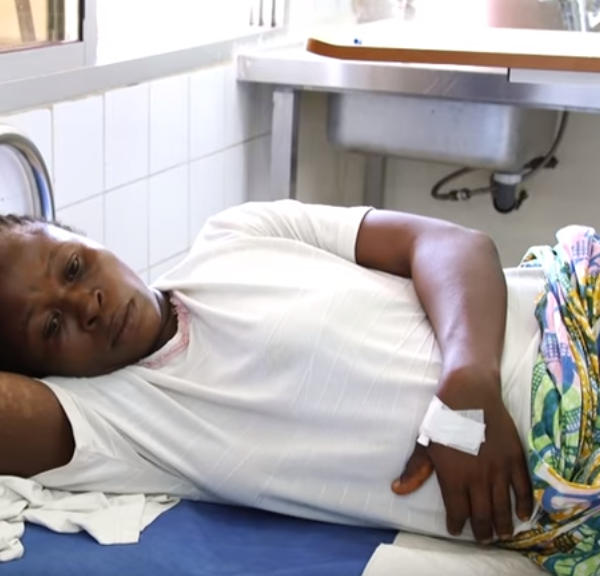 She explained to us when she went into labour her family was unable to take her to hospital and couldn’t afford an ambulance. It took her village three days to raise the money for the ambulance, but it had no petrol. They had to find someone with a motorbike to go the nearest petrol station, take petrol to the village with the ambulance before it could collect Zainab. By then the long obstructed labour meant her baby had died and a fistula had formed. Zainab was malnourished, dehydrated and suffered from infected wounds. Tears flowed softly over her face as she told us that even her own children would not touch the food she struggled to prepare.

We are so pleased to say that Zainab has had successful fistula surgery at Aberdeen Women’s Centre. She returned home with her dignity restored and was welcomed with a feast, dancing, singing and opened arms by her village.

To hear more about Zainab, please click on this link for a mini documentary SBS Dateline did on her.

“I knew that if I had given birth in Sierra Leone, it is highly likely that one or both of us would not have survived. That was the catalyst for me to start the Aminata Maternal Foundation.”

Our CEO and founder of the Aminata Maternal Foundation has shared her story as a refugee and as a mother with Marie Claire Australia. Fleeing from the civil war in Sierra Leone, Aminata speaks to Marie Claire about how despite hardship and uncertainty, she found safety in coming to Australia. Read more about Aminata's story and her drive to setting up the Aminatation Maternal Foundation in our bio! 💛👆 #maternalhealth #sierraleone

Zainab, who was barely 15 years old and 43-weeks pregnant, would of had to walk 125km to give birth safely. Luckily, the Aminata Maternal Foundation were able to transport Zainab to the Aberdeen Women’s Centre who gave her the free operation needed to save Zainab and her baby.

Over the last 3 weeks, YOUR walking and donations will help girl likes Zainab to safely delivery their babies 🤱

We cannot thank you all enough for stepping up this November. 👏 We have loved seeing your daily walks in the rain, hail or shine (and even with your dogs!🐶)

Thank you for being so dedicated in joining our cause to save the lives of mothers and babies in Sierra Leone. We truly have made leaps and strides this year! 🏆🎉

💛 But it’s not over just yet! 💛 Your profile pages are still open on our fundraising page … so there is still time to donate and share Zainab’s story!

🏆 🤗 Congratulations to all of our prize winners who did some awesome fundraising and participating in our #AMFWalkingChallenge2021! 🤗 🏆

Thank you for being so dedicated in joining our cause to save the lives of mothers and babies in Sierra Leone.

🙌 🙌 But it’s not over yet… your profiles and our fundraising page will remain active for a few weeks so there’s still time to reach our $75 000 goal!

Can you believe it!? After 3 weeks of walking, running, skipping, it’s the last day of our annual #AMFWalkingChallenge. We did it! 😱

We cannot thank you all enough for stepping up this November. 👏 We have managed to raise $71 220! That’s over:

👀 Remember to watch closely tomorrow as we announce the prize winners...you could be a lucky winner to receive one of the many gifts and goodies donated by our wonderful sponsors:

A photo taken of our CEO, Aminata, pretty much sums up how excited and grateful we are to you all for the incredible support this November in our #AMFWalkingChallenge2021. 👏 🤗

💛 Yesterday, Aminata, along with our fantastic volunteers walked 21km to celebrate nearing the end of our challenge!

💛 In walking together, we can improve maternal mortality, helping girls like Zainab by increasing access to medical services as well as education for women and girls in Sierra Leone 🤱🩺

💛 It is Day 21 today! With one day left in our annual challenge, it’s not too late to make a donation! Check out the link in our bio.

Can’t walk in the challenge this year? 🤔 Every donation adds up and is felt by the women in Sierra Leone! 💛

For this year’s #AMFWalkingChallenge2021 we’ve been walking for girls like Zainab, who was barely 15 years old when she:

💛 LUCKILY, the Aminata Maternal Foundation was able to transport Zainab to the Aberdeen Women’s Centre who gave her the free operation needed to save Zainab and her baby.

🤗 🏃THIS is why we are Walking With Purpose this November; to tackle birth mortality to safely deliver children like Zainab's baby boy Amos.

Because, after all, motherhood should mark a BEGINNING, NOT an END.

✍️ It is not too late to join the challenge or donate- check out the link in our bio!

This is equivalent to the cost of over 120 cesarean births...that’s over 120 mothers, including young girls like Zainab, who can now safely give birth in Sierra Leone. 👏 🤗

Did you know:
💡 1 in 10 children in Sierra Leone won’t see their 5th birthday.
💡 Mothers are 200 times more likely to die in childbirth than Australian mothers
💡 11,000 newborns die each year from preventable birthing complications

It is our vision that no mother or child in Sierra Leone dies during childbirth due to poverty. With each step we make, we get closer to this goal.

In walking together for the #AMFwalkingchallenge2021, we can improve maternal mortality in increasing access to medical services as well as education for women and girls in Sierra Leone 🤱🩺

💛 Not enough time to walk this year? Every donation adds up and is felt by the women in Sierra Leone! 💛

🏃🏃🏾‍♀️ With less than a week to go in our #amfwalkingchallenge2021, we want to take a moment to reflect on where your fantastic fundraising is going...

🤝 Our partners at the Aberdeen Women’s Centre opened their maternal unit in 2010 to provide the highest standards of maternal healthcare for women in Sierra Leone. 🤝

With our support, they:

🙌 provide the only comprehensive fistula repair service in Sierra Leone
🙌 give midwife training graduates a month-long practical placement at the Aberdeen Women’s Centre.
🙌 Safely deliver more than 200 babies each month
🙌 Treat more than 12 000 children each year in their outpatient children’s clinic, including immunisation services and health education.

It’s not too late to sign up to walk or make a donation! 💛 Check out the link in our bio.